The UP Phil-LiDAR 1 is privileged to have been invited as resource speaker to the Regional Conference on Disaster Risk Reduction and Management of Mindoro Marinduque Romblon Palawan or MIMAROPA Region on October 17, 2017 held at the VJR Hall Provincial Capitol of Puerto Princesa City.

The Phil-LiDAR 1 team was composed of two component heads and a subordinate namely Engr. Sarah Jane Samalburo, Chief of Data Pre-Processing Component, Engr. Ruby Ann Magturo, Supervisor of Data Archiving and Distribution Component, and Nur Hussain S. Maba, Research Associate of Training Component. Engr. Sarah Jane Samalburo delivered her presentation on Geo Hazard Mapping in the afternoon. The program also put up booth during the whole day conference to bring awareness of the project which promotes disaster risk reduction and prevention in lieu of the conference. Other project who put up exhibit was Department of Science and Technology – Deployment of Early Warning System (DOST-DEWS). 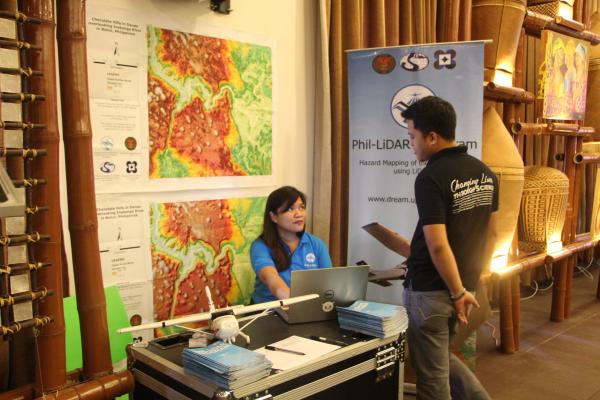 The program started by acknowledging all DRRMOs from different municipalities of MIMAROPA Region. Vice Governor Victorino Dennis Socrates gave the welcome remarks on behalf of Governor Alvarez. DOST-MIMAROPA Regional Director Josefina Abilay gave the rationale of the conference and introduced the keynote speaker Undersecretary Solidum. Director Abilay discussed the importance of the preparedness of the region in response to disasters and so the conference shall equip Disaster Risk Reduction and Management Officers (DRRMOs) of MIMAROPA Region in preventing hazards and lowering the risks brought about by natural disasters.

Undersecretary Solidum talked about Philippines being highly exposed to hazards stating that the country ranked third among countries exposed to hazards and still third among countries at risk to disasters not to mention the geographical location of the country surrounded by waters. Although Japan is also highly exposed to disasters, fortunately they are not in the top countries listed as they are well-prepared compared to the Philippines, Dr. Solidum stated. He discussed natural disasters the country faces such as typhoons, earthquakes, and even tsunamis. 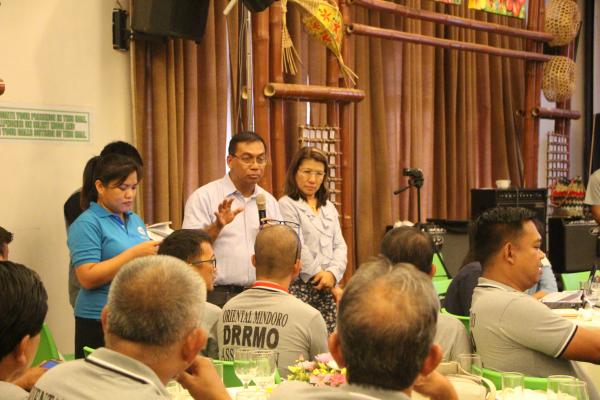 DOST Usec. Solidum answers a question from a DRRMO.

The keynote speech was followed by the Department of Health speaker Mr. Martin whose agency’s advocacy is to train DRRMOs to be the first aiders themselves in times of emergencies in their communities so they do not have to solely rely on Emergency Medical Technicians (EMTs). Climate Change Commission speaker Mr. Patino followed who shared about the roles and differences of Local Climate Change Action Plan (LCCAP) and National Climate Change Action Plan (NCCAP). In the afternoon, PAGASA meteorologist Pajarilla tackled about understanding the nature and movement of typhoons and preparedness of the people. Geologist Mr. Medina of Mines and Geosciences Bureau (MGB) MIMAROPA discussed about Geo Hazard Mapping especially in the areas of the said region. Engr. Samalburo talks about the operations and products of Phil-LiDAR 1 program.

Engr. Sarah Jane Samalburo discussed about Geo Hazard Mapping on a national level covering 262 river basins including the MIMAROPA region. Engr. Samalburo started by giving a background on the Phil-LiDAR 1 program and how it transitioned from DREAM to the current name then focusing on the core mission of the program which is to provide accurate flood hazard maps nationwide.

Philippine Coast Guard-MIMAROPA followed the speech who discussed about the safety of fish folks especially in times of typhoons. The agency clarified with the DRRMOs and LGUs that their advice during typhoons should be taken seriously despite different advises from other agencies as coast guard knows best what happens within their parameter of assignment not to mention the various experiences they have had. Other DRRMOs have been relying with the coast guard especially the residents in small islands or by the coastal areas.

The conference ended at 7:00 in the evening with a closing remarks delivered by the Office of Civil Defense (OCD) MIMAROPA Mr. Eugene G. Cabrera.