In the Asia-Europe Meeting Conference on Disaster Risk Reduction and Management hosted by the Philippines held last June 4-6, 2014, President Aquino included in his keynote speech the large-scale enhancement of scientific capabilities in our country. The 18 critical river basins’ early warning systems are developed by Project NOAH, under which DREAM generates LiDAR data for flood modeling and mapping.

The ASEM event held in the Diamond Hotel was spearheaded by President Benigno Aquino III, and timely for the Philippines in light of Typhoon Haiyan’s rampage across Eastern Visayas last November 2014, destroying thousands of homes and lives. The conference’s theme is “Post Haiyan: A Way Forward.”
According to Coloma, the initiative has been adopted by 49 heads of state and government, the president of the European Union, and the Secretary-General of ASEAN, all of which comprise the ASEM.

In the ASEM statistics, more than 150 senior national and local government officials, members of the academe, representatives from the private sector, non-government organizations, and international organizations from 36 countries attended the meeting.

“This is precisely why instead of simply being reactive, our administration has always taken a proactive approach to reducing the risks posed by natural calamities. From day one, we undertook the large-scale enhancement of our scientific capabilities. We acquired and strategically positioned doppler radars that enable us to better estimate the amount of rainfall brought about by incoming cyclones. We launched a project called NOAH, the Nationwide Operational Assessment of Hazards which involved integrating the early warning systems along 18 major river basins, installing hundreds of so-called Hydromet devices across the archipelago.” – President Benigno Aquino III 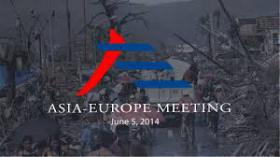