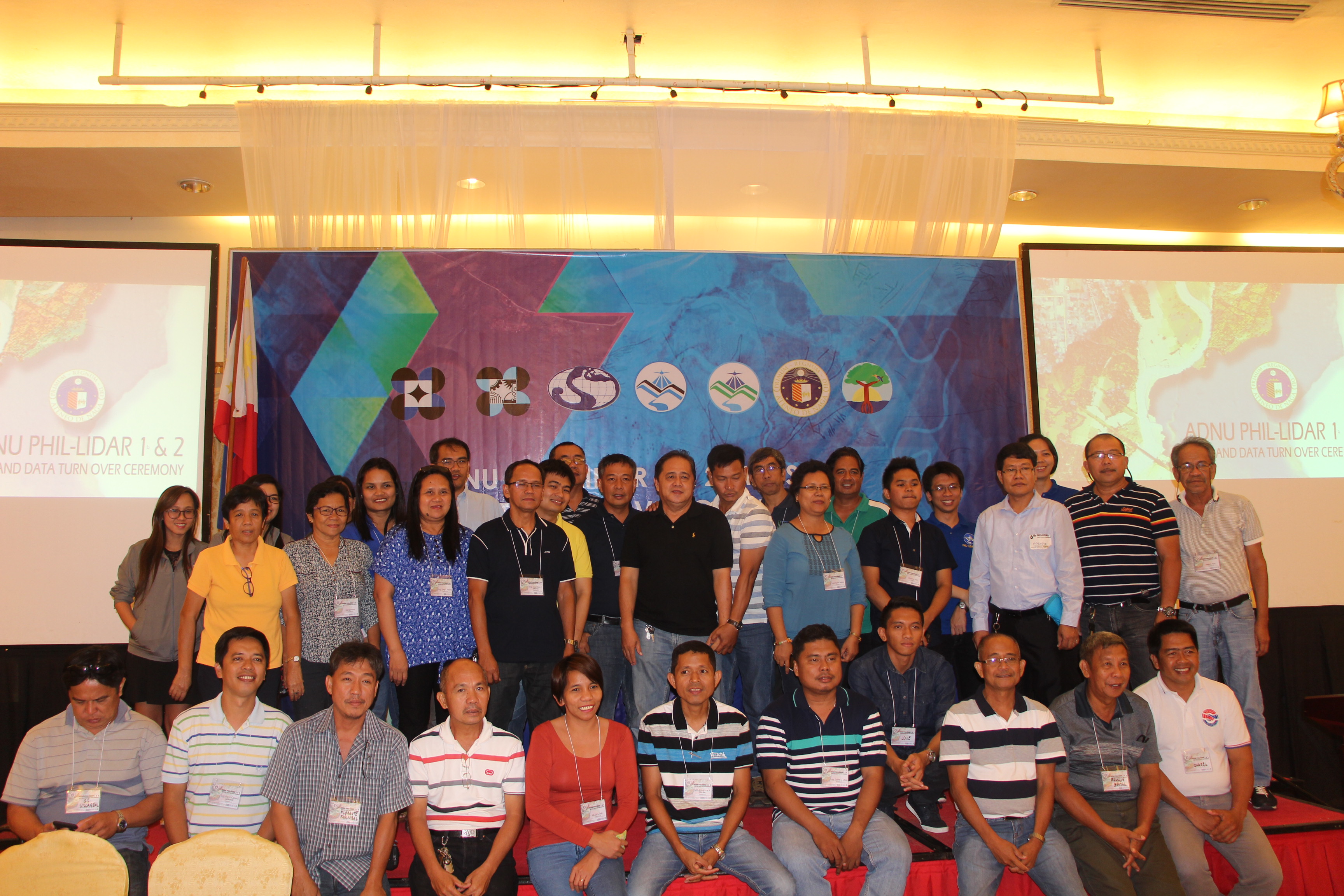 The 6th Luzon Cluster Conference was successfully conducted on March 30 – 31, 2017 at the Villa Caceres Hotel, Naga City hosted by Ateneo de Naga University. Day 1 was the accomplishment updates per SUC/HEI and UPD’s per component while day 2 was the Turnover Ceremony to 75 LGUs from Bicol Region and 10 from local government agencies such as Department of Environment and Natural Resources, Department of Agriculture, Bureau of Fisheries and Aquatic Resources, Forest Management Bureau, and Bicol Consortium for Agriculture and Resources Research and Development (BCARRD). Philippine Council for Industry, Energy and Emerging Technology Research and Development (PCIEERD) as the project-monitoring agency headed by Ms. Clarinda Reyes was also present. The cluster conference is considered to be the last leg for Luzon as the program officially closes this year with some partner State University Colleges (SUCs) and Higher Education Institutions (HEIs) have closed already.

On day 1, Phil-LiDAR 1 program leader Dr. Enrico C. Paringit delivered the opening remarks. Dr. Paringit thanked the host school for hosting the event. He expressed his appreciation to all who have given all out in ensuring to accomplish each’ respective tasks according to their commitments. He also shared that the UP Diliman has been officially extended until the end of the year (2017). There are additional 128 rivers to be completed as part of the extension and the institution committed to process 64 more river basins out of the 128, and only 12 would have the flood map as per the capacity for bathymetry survey, flow measurements, and the like not to mention the recent closing of some partner SUCs already. Dr. Paringit hoped that everybody still has the energy and enthusiasm to move forward and get the job done stressing that “work does not stop when it comes to disaster and climate change.” He also congratulated those who are done with the program like UP Baguio and Central Luzon State University (CLSU) at the same time encouraging to pour efforts for those who are still in the program while there are still resources to move on – aiming to achieve 100% work done at the end of the program.

Dr. Paringit expected a good number of LGUs to attend in the turnover on day 2 as it is the first turnover for Bicol region not to mention it had been a victim of typhoon last December – it is never too late to send-out datasets, he said.

After the opening remarks, updates per SUC followed respectively: University of the Philippines Los Banos (UPLB), Mapua Institute Technology (MIT), Isabela State University (ISU), Central Luzon State University (CLSU), Ateneo de Naga University (AdNU), and University of the Philippines Diliman (UPD). During the open forum, Engr. Fibor Tan of MIT raised a question if the distribution of maps to private companies is possible, accessible, and if there is a payment. Engr. Ruby Ann Magturo of UPD-DAD component answered the question that maps are ‘downloadable’, complete, and no restrictions except for other data products. Other data products are usually referred to National Mapping and Resource Information Authority (NAMRIA) as the official distributor. In case of acquiring new data, the LiDAR 1 is still in process of getting prices. Dr. Paringit added that flood hazard maps are considered “public-service products” – it will have a benefit or value to anyone in the Philippines whether you are a Filipino, a foreigner, in public office or in private company – anyone may use the map. He stressed, “Disaster resilience and management is everybody’s concern – that’s the rationale behind it.” Moreover, there is a policy on free data distribution for use. If for business purposes like of insurance premium, it is okay. And for other data products, it is still subject to scheduling of fees.

Ms. Clarinda Reyes of DOST-PCIEERD gave the closing remarks, acknowledging all partners’ efforts for the program and gave some reminders to the implementing SUCs/HEIs in accordance to the closure of the project at the end of 2017.

Below is the list of municipalities from Bicol Region who attended the Turnover Ceremony:

The day 2 started at 9:00am and opened by no other than the president of Ateneo de Naga University, Fr. Primitivo E. Viray, SJ. The father president acknowledged all the delegates in the hall especially the representatives from different municipalities. Fr. Viray shared how he first made contact with LiDAR through his businessperson friend who owns airplanes. He was asked to bless the plane for the project – as explained to him; it is used for scanning the rivers, like scanning a document in layman’s term. He was fascinated to learn about the technology and how it helps the municipalities prone to typhoons.

On the other hand, program leader Engr. Joanaviva C. Plopenio, gave an overview on the use of map. Plopenio explained the types of maps produced by the program such as flood hazard maps, natural resources maps (coastal resources, agricultural resources, and forest resources) solar, wind, hydro, and fresh water resources for drinking. She shared that ADNU took courage in the Bicol region in accepting the project to serve the localities and communities. It took three years fruition of scientific research by the implementing SUCs/HEIs (the maps) that the LGUs are about to receive as she explained to LGU officials. Engr. Plopenio added that there is a need to update on comprehensive land use plan (CLUP) by LGUs therefore the maps for turnover are very helpful – the maps that would lead which ways are prone or not to flooding.

DOST-V regional director Tomas B. Brinas, CESO III gave a message on the importance of the project. Saying that, “without the hazard maps, no amount of warning will suffice in our efforts to avoid disasters.” People are made aware of the dangers, suitable sites for evacuation centers and future development areas not prone to hazards in Bicol region. He noted the significant milestone for the project and the people involved in the program, and the lifesaving maps it produced.

Dir. Brinas said that the program does not end today and everybody has to agree to a long term involvement consisting of the following: (1) Sustained efforts to reducing vulnerability and exposure of communities to hazard (2) Support enhancement of capabilities to reduce their own risk exposed to hazards and to (3)  Institutionalize local DRRM capability.

He believes by saying, “we Filipinos have the capability to accomplish outstanding relevant research and development achievements.”

Dr. Enrico C. Paringit delivered his keynote speech by first explaining the aircraft use to the LGU officials sharing that there had been 1600 of flights already in the last five years, spent 5000 flying hours and so far have not encountered a single fatal accident to the planes. Dr. Paringit shared that Fr. Viray did the blessing – “we’ve come full circle” as he would say apparently being together in the event. Dr. Paringit shared that the LiDAR team came to share about the accomplishment of the program and to give thanks for the blessings and graces that had been given to the team in doing the task. The job did not only involve flying in small aircrafts (3000 feet high) but as well as considered as “buwis – buhay” which made him proud of the researchers’ safety in the program.

Dr. Paringit then shared as to how the aircraft possibly help the team in performing the work – the need to prevent and mitigate disaster from happening. He said ‘preparedness is imminent’ that the team must be able to respond to the needs of those who have been affected. At some point, there is a need to start all over again given the challenges. Under the new DRRM laws, there is much bigger priority on prevention and mitigation than on response or rescue. It is more important now to take necessary actions for us to prevent things from happening, and why people need not to be there anymore.

He also tackled on ‘rational decision-making’ explaining that if only the people know when the flood would come, if they know the depth of the flood, and if they know how long the flood would last then “they will take the necessary actions to put themselves out of harm’s way.” Adding that even our decision makers (government officials), do also make rational decisions. But we can only take this rational decision if we have the correct and precise information in place – accurate, reliable, and timely information for us to be able to make these kinds of decisions.