DREAM brings its flood hazard maps of critical river basins to the Senate of the Philippines in a 2-day exhibit (May 7-8, 2014) at the Senate Office in Roxas Boulevard, Pasay City. Included were the 100-year rain return flood hazard maps from the Flood Modelling Component, meaning that statistically, the flood scenario will occur at least once in 100 years.

The Senators who stopped by to have a look and inquire about the flood hazard maps were: Senator Koko Pimentel, Senator Ralph Recto, and Senator Bongbong Marcos. According to them, they have heard of the DREAM Program as well as Project NOAH, both under the Department of Science and Technology (DOST) umbrella. DREAM and Project NOAH were in the Senate Exhibit together with the Philippine Atmospheric Geophysical and Astronomical Services Administration (PAGASA). 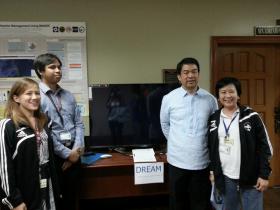